There are a good number of ways that targeted content can be created, and using features like split testing, conditional content or whatever it’s something that pretty much anyone can do.

But, before getting into how the email for each person will look make sure your lists are segmented.

Email might be your total relationship for the majority of your list so you’re going to want to make the most out of that. Give people what they want and make them feel like your learning what they want as individuals. (…that sounds horribly ‘cheesy’ but you get the idea!)

Sending everyone on your list the same message isn’t always a bad thing but remember it’s not the only way to do it.

There will always be times when you do need to email everyone, and that’s fine but you’re likely to have more requirement for only sending messages that are relevant to the people receiving them.

It helps you to create more targeted email campaigns and gives you a much better understanding of what people want in terms of content and frequency.

Why it’s bad if you don’t segment

Emailing non-reponsive users is largely pointless and you also run the risk of those email addresses being recycled as Spam traps over a longer period of time.

Segmenting lists enables you to take less responsive people as groups and make decisions on what you do.

For a start, if you identify users that haven’t done a thing with any email you’ve sent in the last 12 months then it’s about time you opted them out.

On the other side, if you always send each of your email campaigns to everyone then you’re more than likely going to frustrate people and that could result in higher opt-out and / or complaint rate.

Is it easy to do?

More than likely, but how you segment lists can depend on where your data is managed.

If you’re using a CRM, a data management solution such as Apteco FastStats or you have a bespoke in-house solution then the best approach would be to segment in there. Then use the API of your ESP to pull campaign response metrics to supplement your data source which enables you to push pre-segmented email campaign lists back into your ESP.

ESPs have different levels of functionality when it comes to segmentation. In most solutions you should be able to quickly and easily make selections using filter rules based on demographic, variable data, customer insight and campaign response.

You won’t need to know SQL as most ESPs have on-screen controls that make it easy to build filter rules visually. 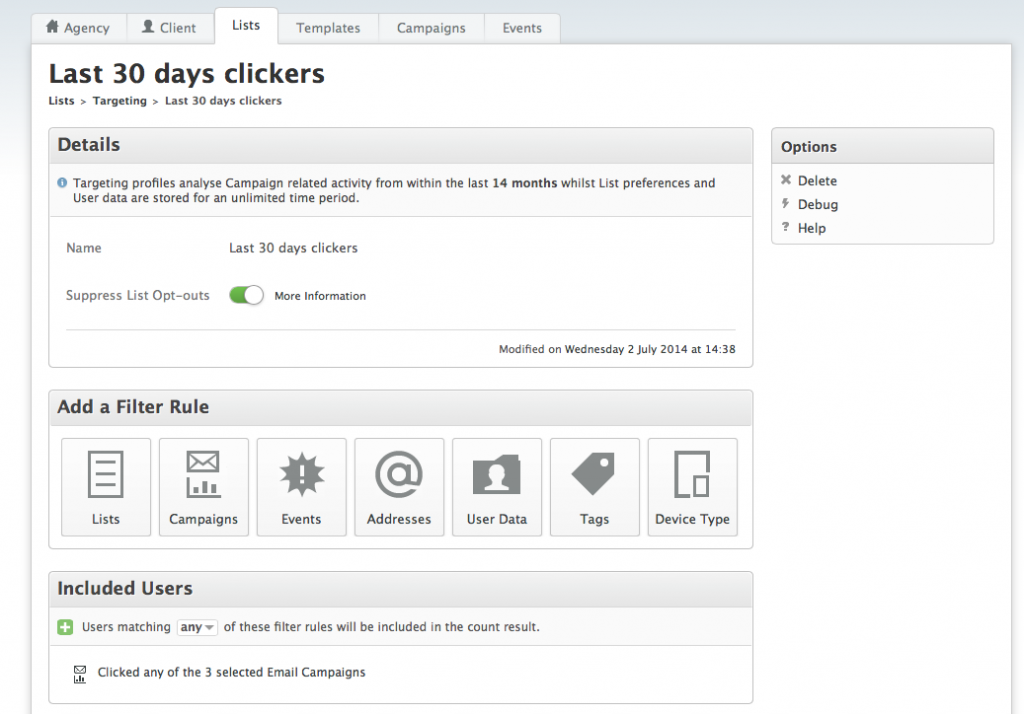 A basic example being “Give me everyone that has a postcode starting with ‘CV’ and has clicked on each of the three selected email campaigns”.

Obviously, you can make it more complicated than the above but simple is a good starting point. In either case, it should be quick build some rules, find out how many matching people there are then decide whether you want to do something with that data.

What results can you expect?

Good results can be achieved and here’s 10 case studies from Econsultancy that details the kind of uplift in response rates that you could reasonably expect.

…and you can expect to feel good about doing things a little bit better whilst saving yourself the headaches that come from using old and unresponsive data.